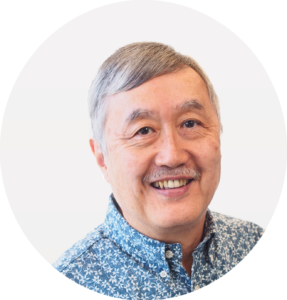 Ray Tsuchiyama is a consultant based in Honolulu, Hawaii. In the 1980s he was at Digital Equipment Corporation at its Massachusetts headquarters, then returned to Honolulu to join Castle & Cooke and Mitsui Real Estate; he launched The Hawaii High Tech Journal magazine.

From 1991- 2011 he lived in Tokyo and had roles with the Massachusetts Institute of Technology, Analog Devices, and start-up Tegic Communications, which grew from zero to $100 million annual revenues over six years. After AOL Time Warner acquired Tegic, he led Asia-Pacific and Latin American operations.  His team’s activities for consumer usage marketing programs was honored at the Mobile World Congress in Barcelona, Spain — winning the GSMA Global Mobile Award for Best Use of Mobile for Social and Economic Development.

He was senior consultant to Google, Inc. in product management leadership.  Relocating to Hawaii after the 2011 East Japan Earthquake, he was with University of Hawaii Foundation on Maui, and was appointed COO of the DHS/FEMA-funded National Disaster Preparedness Training Center.  He has lectured on disaster management at the Asia-Pacific Center for Security Studies.

He has a BA degree from Western Washington University and a MFA degree from University of Massachusetts at Amherst, and is a Farrington High School alum, where he is launching a new project.  He was on the President’s International Advisory Committee at Barnard College (Columbia University), a former Maui County Commissioner, and currently serves on the board of the Pacific and Asian Affairs Council. He was formerly on the board of the Hawaii District Export Council.

He was a co-host for a show on China for ThinkTech Hawaii and co-hosts the series “Life after Statehood”.  He contributes to Civil Beat, Honolulu Star-Advertiser, The Hawaiian Journal of History and was a blogger for the Maui News, winning three consecutive annual awards from the Society of Professional Journalists.  His essay on C. W. Dickey won the AIA/Hawaii Chapter prize for “best essay on Hawaii regional architecture”.  He has also published in Forbes.com; Honolulu; The Hindu; Mobile Communications; Japan Times; Asia Times; Asian Business; New York Times; Reuters; Nikkei Weekly.  Quoted in: Newsweek, Financial Times, BusinessWeek, China Daily, Toyo Keizai, San Jose Mercury, and Science.

He was an invited speaker at the University of Southern California “Doing Business in Japan” program, U.S.-Asia Technology Management Program (Stanford University) on “Developing Asia-Wide Technology Perspectives”, plus seminars for the U.S. Embassy (Japan), Tokyo Institute of Technology, Waseda MBA program, and University of California at Berkeley.

In 2017 he was appointed Co-Chairperson (representing Izumo Taishakyo Shinto Shrine) for the annual Hiroshima Peace Bell Ringing Ceremony, part of an ecumenical community alliance, including the Hawaii YMCA and Hiroshima State/City-Sister associations.  He was the recipient of the East-West Center “Honor Award” for contributions to “Asia-Pacific relations”.

See How We Can Help Your Organization